My nose runs like a leaky faucet. Sweat clings to my clothes like a gambler holds a winning lottery ticket. Deep in the valley of the Urubamba River, where the Andes Mountains meet the Peruvian Amazon, moisture fills the air and leaves things as damp as a trip through the spin cycle.

Passing broad ferns covered in fresh rain, we stumble through puddles by the light of our cellphones, skirting below the nose of Machu Picchu under the cover of darkness. At this hour, only the mountain’s contours can be seen behind a veil of cloud, the valley shrouded in mist. A shade over an hour ago, we spilled out of a dozen passenger vans to make this 11-kilometre hike along the railway into Aguas Calientes, a midnight train of travelling misfits.

We were supposed to have arrived hours ago by daylight. Then again, not everything goes according to plan in a place where nature holds enough sway to be feared and revered as the most powerful of gods. Here, even the best-laid plans fall to pieces.

There are three ways of getting to Machu Picchu, all of them requiring either significant time or great expense. There are no roads connecting the Incan wonder with the rest of the world, wide enough for busloads of tourists to be ferried from Cusco right to the Sun Gate. One either arrives by train, a heavily-monopolized trip that will run you about US$130 round-trip; by trek, an option requiring both time (generally 4 days) and funds (anywhere from US$500 to US$1,000); or by bus/colectivo to Hidroelectrica, whereupon you must walk the remaining 11 kilometres into town by following the train tracks along the Urubamba River — the cheapest option by far.

In good weather, the ride from Cusco to Hidroelectrica is meant to take about six or seven hours. The road meanders over 220 kilometres through the mountains north and west of Cusco, before curling back south and east to the hydroelectric plant like a giant fish hook seen from above. The roads are narrow and steep, often following switchbacks that would seem cruel even by Mario Kart standards. In the best of circumstances, it’s a difficult drive. In worse conditions, it becomes something else entirely.

The ride to Hidroelectrica begins with rain. My breath fogs in the 16-seat passenger van, the morning in Cusco still bone-chillingly cold. In the ancient seat of the Incas, the nights regularly dip below freezing from May to August. I’m the first one to be picked up, and the van is late — nearly 20 minutes past our scheduled departure time.

Our van fills with Spaniards, Argentinians, and Chileans, and varying accents of Spanish ping-pong their way around the cabin rows, a word or two occasionally registering in my primitive vocabulary. The mood is light, full of excitement for the journey ahead. For many of us in the van, Machu Picchu is the culmination of weeks or months of travel — one last hurrah before returning home.

The road to Hidroelectrica leads first through the Sacred Valley, home to stunning mountains and centuries-old ruins. I had taken part of the same route the day before, from Cusco to the village of Ollantaytambo. Then, the hills were bathed in rich colours of gold and emerald green. On this day, the rain is relentless, streaming down the van’s side windows and turning the surroundings a murky grey.

Near Urubamba, our van gets a flat tire. It’s a minor mishap, but perhaps an omen for the road ahead. Soon, we’re climbing up to 4,200 metres, staring face to face with glacial mountains. What was rain before has become snow, leaving the roads slick and unpredictable.

Within minutes, we reach a convoy of stopped traffic — brake lights trailing off into the snowy void. We hop out of the van for some fresh air, then climb back inside, figuring it’ll pass soon. An hour and a half later, we’re still in the same place. 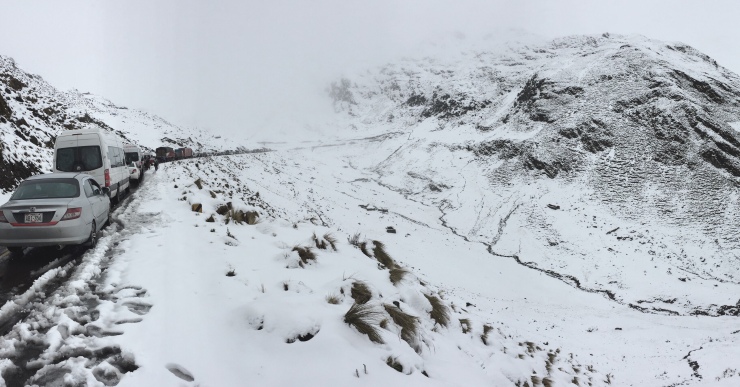 One of our passengers — an American I’ve befriended from Minnesota — has been gone for well over an hour, and his wife hasn’t been able to find him. I hop out again and wander from car to car until I find him and realize the cause of our delay: a car is stuck halfway up the hill, its tires spinning and forming ruts in the snow. My friend tells me he’s been pushing cars up this section for the past hour. (Leave it to a Minnesotan to take charge in winter weather.)

We’re not going anywhere until these cars are moved, so I join him and start pushing. Within minutes, the problem becomes glaringly obvious: for each car freed, another one makes the same mistake of following too closely on the way uphill, instead of waiting on the plateau until the way is clear. We push 10 cars, then 20. Soon enough, we’re into our third hour on the mountain pass.

The sky begins to darken by the time we clear the pass and start our decline, and conversation in the cabin quiets. We were supposed to have completed our hike to Aguas Calientes by 5 or 6pm; instead, it’s looking like we won’t even start walking until 9 or even 10pm — leading to an arrival well past midnight. I close my eyes and wish for sleep.

On the way down, we’re passed by people in plastic rain ponchos pushing mountain bikes down the road — a sight so totally ridiculous in the weather conditions, words fail to describe it. One of the would-be mountain bikers opens our van door and pleads for a ride, telling us his tour company forced his group to descend by bicycle, since they had signed up for a cycling and rafting package. His parka is covered in snow, and his hands are trembling. We let him in, and he slumps into the middle aisle, exhausted.

The clock shows 10:20pm when we finally arrive at Hidroelectrica, pulling into a gravel parking lot illuminated only by the lights through the nearby power plant’s guard office windows. A few other buses sit parked and empty in the lot; others have already started their return to Cusco or Santa Teresa, their twin beams flashing as they passed us by on the way out.

We roll open the van doors to a quiet and still night, the only sound coming from the river nearby. Our driver tells us to stick to the train tracks and expect a 2.5-hour walk, then he gets back in the van and disappears into the night.

By darkness, everything else becomes amplified. Each dog’s bark sounds more visceral, more threatening. We follow the tracks along loose stones and muddy trails, crossing narrow bridges in the night and looking over our shoulders to see if the last bark will be followed by more than a warning. Somewhere along the way, we make a friend; a small, shaggy dog latches onto our group and walks with us for nearly two hours, running ahead and waiting to see if we’ll follow. He knows the route better than we do.

By the time we arrive at the dirt road into town, it’s well past midnight. Up ahead, Aguas Calientes is a blur of twinkling lights. We follow them like moths drawn to a flame, our own private oasis in the desert of darkness and exhaustion. Those lights promise sleep, showers, food. I quicken my pace.

The streets of Aguas Calientes are quiet and empty by night. We walk into town and past dozens of tour buses, relieved for the night of their task of shuttling thousands of tourists up to Machu Picchu’s entrance. It’s taken nearly 18 hours to reach this place. It’s a wonder Machu Picchu was ever found.

At 4,600 metres above sea level, Laguna 69 is higher than the summit of the Matterhorn. The cows in Peru seem to handle it just fine. . . #laguna69 #huaraz #huarazperu #visithuaraz #visitperu #travelperu

1 thought on “The Midnight Train”