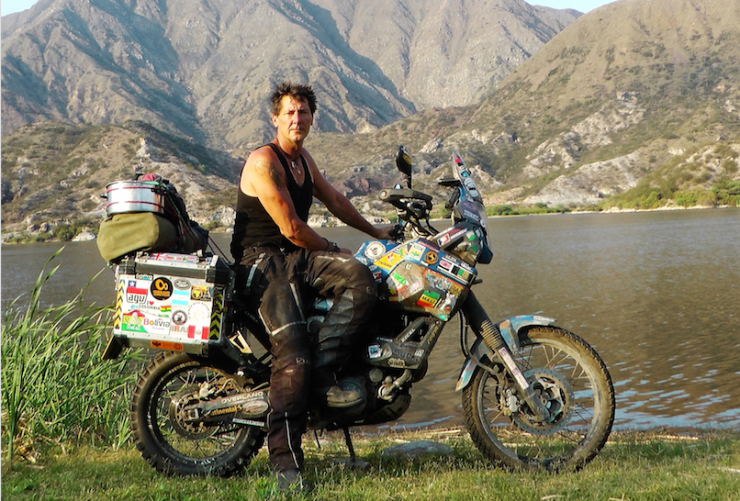 Many dream of seeing the world. Spencer Conway has done it from atop a motorcycle. Since leaving his job as an English teacher behind at the age of 41, the Biddenden, Kent resident has logged over 100,000 kilometres on his Yamaha XT-660 Tenere, circumnavigating Africa and South America — becoming the first person to complete the Africa bike trek solo.

He’s traversed deserts and jungles, enduring mud roads and sandstorms while raising over £25,000 for Save the Children. He’s also been through some of the least-travelled places in the world over the past decade, surviving crashes and even a near-fatal shooting crossing the border between Kenya and Somalia — a place, says Conway, where he came across a training ground for pirates:

“They just turned around and started shooting an AK-47. It took off the back tire; got a bullet hole through the swing-arm; the brake caliper exploded, went through my arm, came out the other side; fell off, broke three ribs. [I] jumped back on the bike, but I had no tire; it was gone. I just had the rim … the police later told me that they must have run out of bullets.”

“I rode for 14 days with man flu — that’s what they call it over here,” he says. “I had malaria. I ended up collapsing in the streets, and then I was in hospital … and then straight after that, [my girlfriend] got blood poisoning, and she was in hospital for a month. On these long trips, you’ve just got to take it as it comes.”

Conway’s travel method is unorthodox: he carries no GPS, no phone, and no maps.

“It was a way of seeing [something different],” he says. “If you follow [the same routes as everyone], you always end up in the same places as everyone else.”

He’s also encountered his share of roadblocks. Just 200 kilometres from his destination in Colombia, Conway was denied at the Venezuela border and had to take a 12,500 kilometre detour to finish his trip around South America. In Africa, he waited at the Angola border for 36 days before he was allowed to cross.

“A lot of riders make the mistake of living in their speed,” says Conway. “You’ve got to respect other people’s way of life.”

His expeditions have been featured on the Travel Channel, broadcast to over 130 countries and territories. As Conway tells it, his taste for adventure has always been there.

“My father worked for overseas development, so we moved all over the world,” he says. “I was brought up in Kenya up until I was six and then Swaziland in Southern Africa until university, and then I came over to England. But we always travelled, and I rode motorbikes from a young age.”

His next goal is an even bigger one.

“My main aim is to become the first person to circumnavigate every continent in the world over the next ten years,” says Conway. “As long as you’ve got water, fuel, and a tent, the world’s not as big as people think.”