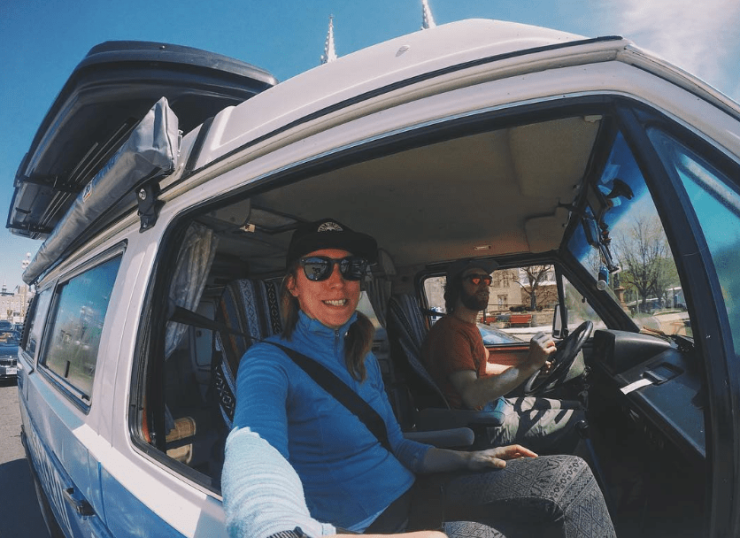 Home for John Rathwell and Tracy Guenard is a pretty small space these days: since May of 2016, the Gatineau, Quebec couple has been crisscrossing Canada and the United States in a newly-polished 1991 Volkswagen Westfalia, meeting people and sharing their stories of pursuing happiness.

“It’s a beautiful van,” says Guenard. “It’s small — 15 feet long — but it’s got all we need, really. It’s got two beds — actually, we could sleep four in here, if it’s a tight space — we have a sink, a two-burner stove, water, a little fridge […] and on the roof, we have stand-up paddleboards, a big Thule box with gear if we want to go hiking or camping, and in the back, we have our mountain bikes.”

The project, dubbed Searching for Sero, aims to shine a light on mental wellness and suicide prevention. It’s a topic that has touched the two quite closely: within a span of mere months, Rathwell lost his father to suicide, and Guenard lost her aunt.

“My dad had just retired,” says Rathwell. “Standing on the other side, to me, [he] finally had his whole life in front of him. He worked seven days a week; he took every overtime shift he could get; he drove an hour and a half just to get to work. And now he’s retired; he’s finally free. But I guess that wasn’t really the case.”

“You wonder about life in a very different way than you would if someone you loved died from natural [causes],” adds Guenard. “There’s a lot of thinking associated with it. And not only do you question that person’s life, you question your own as well — and that’s what we found ourselves doing.”

“I had what most people call the ‘golden ticket’: a permanent job, good salary, good pension, all of that. I had a condo in Gatineau; I was pretty well settled, but then I decided to let it all go and go for a life of adventure and something quite different.” – Tracy Guenard

With a growing feeling that there was more to life than what they were getting out of it, the two eventually came up with a plan to travel across the continent and collect stories from the inspiring people they met. Rathwell, a renowned adventure sports photographer, would gather the photos; Guenard, with her background in criminology and youth intervention, would handle the writing. After Guenard told Rathwell about her readings into the connection between the neurotransmitter serotonin and happiness, the project’s name was born.

“At first, it was just going to be a summer thing […] It kind of started to take its form over the course of that winter and spring into what it is now,” says Rathwell.

“[It’s] a ridiculous idea,” Guenard laughs. “You roll into town and randomly look for people you don’t know, and hopefully they want to talk to you, and let you take photos, and write their life down on paper. Yeah, that’s going to work, right?”

So far, it has — with over 60 stories amassed over the past 16-odd months spent travelling across Canada, and then south into the United States. The couple’s story has spread across the continent, amassing thousands of followers on social media.

“The variety of stories we have now […] everybody’s is so unique. And everybody we talk to motivates us in their own unique way,” says Rathwell.

As for what the couple has learned from the experience?