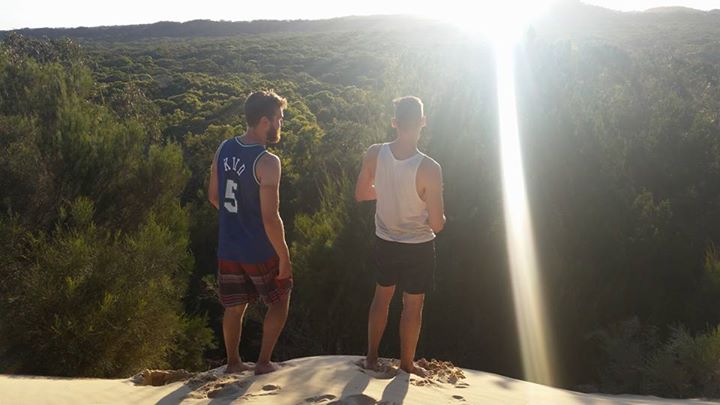 “What brought you to Australia?” I asked.

It was the first night on Fraser Island. The fire blazed bright just a few feet away — the kind of fire that leads to long nights and longer conversations.

He took a sip of beer and thought it over for a moment before replying.

I had expected a cookie-cutter answer about traveling for a few months before heading home, or perhaps working abroad for a year or two — the kind of story just about everyone has in Australia. Now, with a mere five words, we were heading into uncharted waters.

He went on to tell me about life back in New Zealand on the North Island. The surroundings were great; the jobs weren’t. He left to work in the mines in Northern Australia — the job didn’t leave much in the way of a social life, but the pay was good. He had been there for six years.

It struck me how similar his story sounded to those of so many back in Canada — Newfoundlanders and Cape Bretoners seeking work in Alberta’s oil sands, Jamaicans spending their summers picking fruit in Ontario, refugee families sending their meager earnings back to loved ones in their home countries. In the end, we’re all looking for a better life, aren’t we?

It struck me, as well, how much money can govern our lives if we let it — even to the point of obsession. Rare are those who feel as though they have more than enough to begin with. Instead, we envy lottery winners and ask each other, Who Wants To Be A Millionaire?

In my line of work — as in many others — it can be all too easy to become embittered about the number of zeroes in others’ salaries and the lack of zeroes in one’s own. It’s no small irony that all that focus on zeroes leads to a zero-sum game: If you ain’t first, you’re last.

That conversation at the campfire reminded me it’s worth broadening our definition of wealth. I may never be rich, but I’ve made friends all over the world, met more than a few interesting people, and been fortunate to see places that many never get the chance to see. I’m lucky to be welcomed home every time I leave, and doubly lucky that I haven’t had to leave home in search of work. I’ve even seen the Raptors and Blue Jays win a playoff series in the same year, which is the Toronto Sports Fan equivalent of at least six Super Bowls and five Stanley Cups.

The Danes have a word, hygge, that’s as good a definition of wealth as any I’ve heard. In truth, it translates closer to coziness: the feeling you get when you’re spending an evening with good friends, drinking hot chocolate (or something colder) around the fireplace.

Give me that over money any day, and I’ll be a wealthy man indeed.

Tales from the road:

1. “Power is your friend,” we were told by our Fraser Island guide. These were the all-important words of advice for driving 4X4s on the sand dune island’s makeshift beach roads — an experience unlike any other. The hard sand is one thing, but the soft sand is an entirely different challenge — and then there are the waves that break in your path, sending a spray over the windshield as you motor through them.
2. The beaches were great, but the best part of Fraser Island may very well have been the stars. There was no light pollution anywhere to be seen and not a cloud in the sky, and the stars spilled out in every direction. I could have stood and stared all night long.
3. The cooking mishaps continue. Ever since the start of our trip, one dish Warren and I have never seemed to get right is frozen pizza. When we tried it in Melbourne, it stayed in the oven for too long and came out looking more like charcoal than dinner. We tried it again in Canberra, only to realize our hostel had no oven. This led to an experiment in microwaving the pizza until it was warm and then giving it a crispy finish on the frying pan (an improvement on charcoal, to be fair, but still nothing to write home about). You’d think we’d have learned from our mistakes, but we tried it again in Rainbow Beach — this time, my pizza ended up in chunks instead of slices. I think I’ve given up on trying again.
4. If I never drink goon again, it will be too soon.

Perhaps Fraser Island’s most well-known landmark, the SS Maheno washed up onto the island’s shore in 1935 and has captivated visitors ever since. In its heyday, the ship traveled from Australia to New Zealand, Hawaii, and Vancouver.

Words can’t do this place justice. The sand is impossibly white and fine, and the water is a bright turquoise. The Whitsundays are magic, I tell you.

When I was younger and traded rooms with my brother, one of the benefits was being able to redecorate the attic the way I liked. I went all out on turning my room into an underwater oasis, complete with marine-themed wallpaper, a dolphin photomosaic, and model pirate ships. In short, I like the ocean.

Getting to snorkel in the Great Barrier Reef was one of the best experiences of my life. The sheer amount of life underwater is mesmerizing — we swam with schools of fish and got up close and personal with two enormous tuna. The only downside was having to smear my moustache with petroleum jelly to seal the goggles to my face.

What I’ve been reading/listening to:

2 thoughts on “Conversations With A Kiwi”