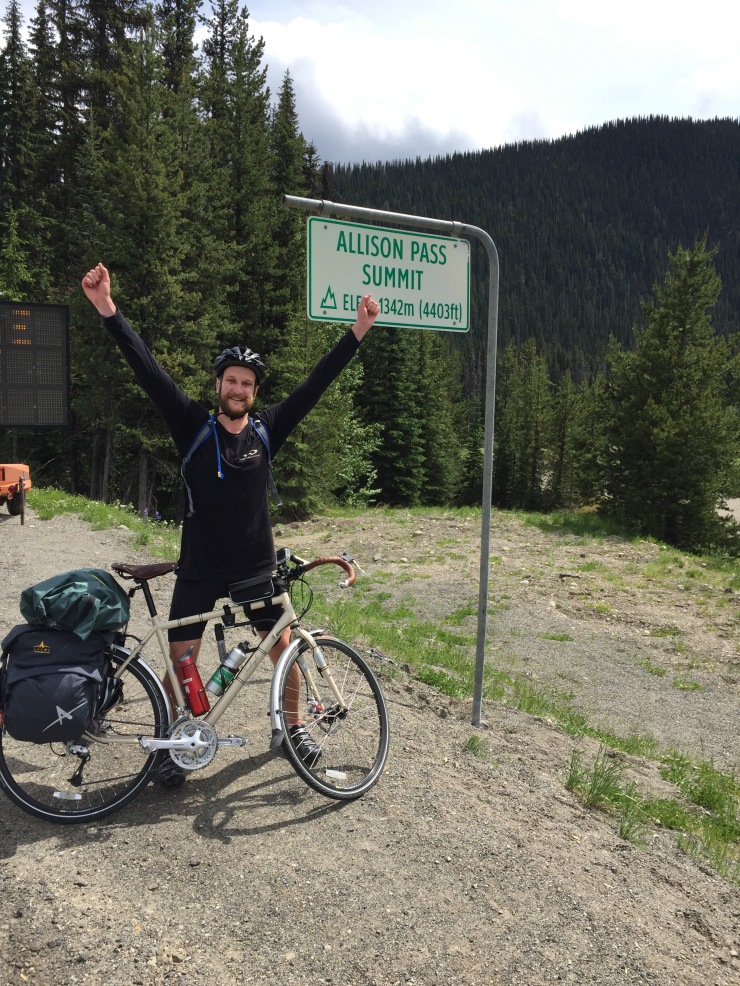 For a bike ride across Canada, the mountains are a hell of an initiation. I puffed and panted enough already with the Hawkesville hills, but Allison Pass is a different beast altogether: 1,342 metres above sea level. (Maybe there is a mountain high enough.) It kept going from there: first, Sunday Summit (1,282 m), then Rogers Pass (1,330 m).

“Just when I thought I was out, they pull me back in.” – The Godfather: Part III

Many times, I was ready to stick my thumb out and hitchhike to the next town. Many more times, I wished I had a motor on my bicycle. Still, each time I kept on pushing.

1. To travel across Canada is to be in constant awe of nature. On my first day of riding, I was struck by its splendour as I rounded a bend near Mission and came upon a snow-capped mountain vista, rising beyond the Fraser River. Day Two was even more beautiful, and the same has been true each day since. (Just check the pictures and you’ll see.)
2. Kindness goes a long way. It’s barely been a week on the road, and already I’ve been offered campsite and motel discounts, beds to sleep in, and meals to eat. (I’ve also been told “I hope you get hit by a car,” so I’ve seen the full spectrum of human kindness.) Two remarkable stories come to mind:

i) I connected with a man from Victoria, BC named Tim through Twitter — he had seen I was cycling through the province and wanted to know more. When he learned about the fundraiser for mental health, he told me he wanted to make a donation, and he said he’d meet up with me when I passed through Hedley. Sure enough, as I rolled into town the following day, he was waiting at the side of the road, donation in hand.
ii) I met a man in Vernon named David as I was locking my bike up at the grocery store. He asked me where I was headed to, and when I told him about my ride, he offered to do what he could to find accommodations for me in Sicamous that night. As I arrived in Sicamous later that morning, I checked my phone and learned he had called the Best Western in town and told them my story — they were offering a free room for the night. Two days later, he did the same in Golden — the Prestige Inn offered a place to stay.

The kindness of people is overwhelming.

“It seems like blessings… keep falling in my lap.” – Chance The Rapper

Kind of a given in a post about cycling through the mountains, but still, wow. I saw them in the distance on my first day of riding, but they really started to come into view on Day Two. By Day Three, I was right in the thick of them.

Views from Day 2: Mission to Hope, BC. #KeepPushing — #BeautifulBC #Canada

The Okanagan region is a national gem: shimmering blue lakes, surrounded by rows upon rows of vineyards, framed by dramatic cliffs. The Shuswap area is beautiful in another way: the picture of cottage country.

Day 7 in the books. Hello from #Sicamous, BC. — #BeautifulBC #Canada #cycle

My favourite combination. The ride from Sicamous to Revelstoke is full of them, each more impressive than the last.